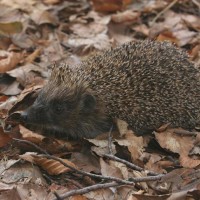 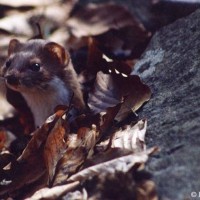 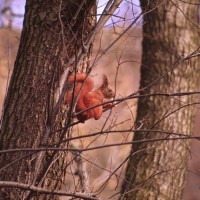 (Polski) Wiewiórka. Fot. P. Szczepaniak
There is an appreciable number of roe deer in the entire Park area. Walking on less popular tourist trails, you can easily encounter it. The biggest of Polish deer, that is the Eurasian elk, occurs only sporadically. The probability of meeting red deer has increased considerably for the past several years.

There are not many wild boars (wild pigs). They can be found mainly in the lower-laying places of the Łysogóry range.

The fox is the only numerous member of the family Canidae. The raccoon dog, an Asian guest, occurs exceptionally. The same applies to the badger, the biggest representative of the Mustelids. In the Park there are also other members of this family: Pine Marten (also known as Pineten, baum marten, or sweet marten), and the Beech Marten (also known as the Stone Marten).

The beaver, the biggest representative of the Rodentia order, was reintroduced in the Park in 1989. Today, its small population lives permanently in the Czarna Woda river.

With regard to small rodents, there are a lot of bank voles and yellow-necked mice while field and pine voles are found less frequently. It should be noted that each year the number of rodents undergoes large fluctuations, which is connected with the abundance of food in a given year. Three dormice: the edible, the forest, and the hazel one are worth attention as well.

Bats are represented by 10 species, including those which are rare in Poland, that is Parti-coloured Nat, and Northern Bat. Among the Insectivora of the Park there are: Common Shrew, rarer Pygmy Shrew, which is the smallest Polish mammal, and Water Shrew. Other species of this order include moles, which occur even very high, in Bielnik meadow below the Święty Krzyż mountain, and hedgehogs, found almost in the entire Park.